Real Prayer and Kind of Oath 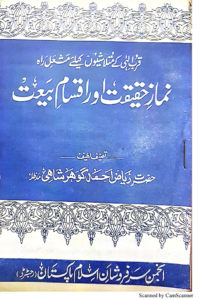 Kinds of Ba’yat (Oath of Allegiance)

The First Kind of Ba’yat The chain of benevolence commences after giving the oath of allegiance in the hand of some perfect (spiritual master) In this category the special benevolence does not bestowed upon for mere relation (reference) or being attached This chain exists all the times but it is impossible to find the original one. For instance a man is conferred with Qadri Saintliness and he was ranked as Ghous (super category of mystics) or Qūt´b (highest cadre in spiritual pivot). His son claimed an accession to the throne after his death then his son and this practice continued. But it is not indispensable that father is a Ghous and the son as well Even the whole generation could not be a Ghous because the Saintliness is not a legacy rather it is a gift of God And even the progeny of the spiritual successor of that perfect (spiritual master) got an accession to the throne the generation after generation Now all these shall be called as Qadri Saints Many among them may even be ‘Ā’mīl (spiritualist) of daily reciting (of some holy word) and incantation and several among them will be apparent ‘Ā’lam (Savant) but will claim for being called as Faqī´r (Darvesh΄). Who may not be conversant even with ABC of Faq´r (Darvesh΄-saintliness) Some one will be claiming for being Ghous while the other as Qūt´b then (they) shall spurn and give the lie to original Thousands of such Ghous and Qūt´b and thousands of such thrones and successor to saint can be found all the time in every city.
Whereas there can only be one Ghous and three Qūt´bs at a time It is useless to be Ba’yat (take oath of allegiance) with these (above mentioned) people It was far better to accompany a saint even for a moment Then he might fall in the category of the dog of ashā´b-e kah´f (Catacomb Comrades) that shall be converted into Hazrat Qitmīr´ by virtue of mere accompanying them.

The Second Kind of Ba’yat: The benevolence instigates in a (mere) personal attachment or connection with any perfect (spiritual guide) in Awaisia Chain but this chain occurs seldom that is why its recognition is difficult as well. One falls in the category of Awaisi Ba’yat whether the spiritual master takes an oath of allegiance or not and (thus) called a candidate and is kept under the supervision and responsibility by the perfect spiritual master till the perfect endorses him some where else.
Hazrat Awais Qarni R.A was also blessed with benevolence by Hazoor Pak P.B.U.H without an oath of allegiance in His PBUH hands Hazrat Abu Bakar Hawari R.A was also in the awaisi benevolence from Hazrat Abu Bakar R.A. The Hawaria Chain emerged absolutely from him Ba Yazeed Bustaami R.A came in the awaisi benevolence from Hazrat Imam Jafar Saadiq R.A as well A Bustaami Chain came out from him as well. Sakhi Sultan Bahoo R.A was also in the awaisi benevolence from Hazoor Pak P.B.U.H. You went for an oath of allegiance (in the hands of) Hazrat Abdul Rehman R.A at the extreme insist of his mother after having achieved some ranks in the mystic voyage that was not obligatory for you Even you showered benevolence without an oath of allegiance in hand and convert into being Muslim through an influence of holy eyes and takes one to Allah. One gets linked with this chain and merged into saintliness automatically if has a benevolence of Qal΄b and Rooh΄ of chest from any perfect (spiritual guide).

An apparent prayer has concern with tongue The followers in 72 sects perform very this prayer. Also the Khavā΄rij (expelled), even the Mūnā΄fiq (hypocrite) and those Qaadiyani (followers of Mirza Ghulam Ahmad) who have been verdict by Ulā΄mā-eIIslam (Savants of Islam) perform the very same prayer. Even the infidel detective had been performing the very same prayer. A fairy witnessed the satan performing the prayer in the times of Hazoor Pak P.B.U.H. If such prayer is a key to paradise then every one will be a heavenly blessed person. Whereas there is a Hadith sharif that:
Translation: “There shall only be one true and heavenly blessed sect”

What is real prayer. It is very difficult to find it. And this can only be found by saints. There are three (3) requisites for real prayer. Lacking of even single proves the incomplete prayer.
First: The tongue should declare It should be declared by tongue because the tongue of infidel does not proclaim.
Second: The Qal΄b should certify that is to say the Qal΄b should also recite prayer along with tongue or the Qal΄b should only say Allah Allah during prayer because the Qaloob of hypocrites do not certify. The Qal΄b shall only say Allah Allah if every heart beat has been converted into Allah Allah that is called Zā΄kīr-e-Qal΄bi (one who recites Allah through heart).
Third: The body should also act accordingly that is to say one should also perform bowing and prostration in prayer because the bodies of sinful do not act There is another strict requisite that (either) we are seeing Allah or Allah is seeing us. It is obvious that we are not seeing Allah and Allah does not see us as well because there is in Hadith Sharif that:
ن اللہ لا ینظرا لی صور کم ولا ینظر الی اعمالکم ولکن ینظر الی قلوبکم و نیا تکم
(Referred in Noo´r -ul Huda Page 60)
Translation: “Allah neither considers your faces nor your deed but considers only your hearts and intentions”
Undoubtedly our acts are pious. But the Qal΄b that is a hub for divine notice is black.
People observe (and say that one is) pious but Allah did not observe it owing to black Qal΄b then this prayer became an ostentation for which there is a divine order that:
Translation: “There is a misery for those who are unaware of real prayer and their prayer is display” (Surah Ma’oon Verse 4-5-6)
The tongue has authority in Alam-e-Nāsoot΄(the earth). The voice of BBC London reached Pakistan and even beyond it An extreme verbal adoration creates livability and impression in tongue. The public admires greatly for one speeches and sermons. An excessive adoration and daily reciting (of some holy word) and incantation grants a kind of saintliness that has a connection between the public and himself. But this is left among public after one’s death and (one) departs as penniless. The Qal΄b (heart) has a connection with the throne of God. Its voice reaches there to throne of God when it sounds here. An extreme adoration through Qal΄b creates kindness and adorability in Qal΄b for which Allah has great adoration. Another category of saintliness is also awarded owing to eternal adoration of Qal΄b that has a connection between the creator (Allah Almighty) and himself and this saintliness accompanied after death and the very same Qal΄b becomes the source to take this prayer to the throne. And the very same prayer then becomes ascension for mo’man (a true believer). There is a hope for being forgiven even two rak’at (one set of standing, genuflection and prostration in prayers) of such prayer is availed. One is still away (beyond) from Allah even one is offering apparent prayer day and night.

Hazrat Mujadid Alaf Saan R.A says (real prayer is for selected persons of God. The general public should also try to achieve this whether one has to go to China for it).
That is why there is in a Hadith that:
Translation: “The prayer is not acceptable without the attendance of heart”
Explanation: Latifa-e Qal΄b (either) gives attendance at throne of God by itself or the Latifa-e Qal΄b sounds there at throne of God by itself and (while) the adorer is in bowing and prostration here at earth! As there is in me’rāj’(ascension – acme) when Hazoor Pak P.B.U.H passed the grave of Hazrat Moosa A.S (Moses) then Moosa A.S was offering prayer in grave. And when You P.B.U.H reached the throne instantly and observed that Moosa A.S was offering prayer there as well.